Serving as a Brittunculi Legionnaire in the very occupation he hates the most, Trystian has yet to labour through some of the hardest lessons of life.

Fourteen years of his youth have been conscripted by the deceitful Legatus Legionis Gallus through impossible choices forced upon him; that time is gone, but now, so are the Romans. Free after so long, Trystian’s only desire is to go home— to the family he fears has been destroyed, even after he’d remained dutifully under the regime, and to the one with whom he left his heart.

In a time when so few dare to pray to her any longer, he hopes his devotion to his Goddess is strong enough to wake her from the slumbers of abandonment, so that she may see him through his ultimate and most brutal path yet ahead. The one that will finally return him home. It is this journey, at the most dismal point in his life, which forces him to reconcile with his past, and make peace with the choices that had been made for him long ago.

It’d started when he’d been a young man, struggling with how to contain his discontent of the Roman occupation of Briton so as not to shame his father. Nevertheless, not even the receding Roman reign had come soon enough for Trystian. But back home in Penrith, Cumbria, the ominous Roman presence wasn’t the only thing that caused Trystian a troubled mind. As a young man coming of age, he found there were some things he didn’t have in common with other young men, and an encounter with a secret Welsh noble with exotic eastern features both terrified and excited Trystian. However, life for Trystian wasn’t just his own or simple enough for him to have the time he had wished for to explore. Such feelings, stirring within him— they remained untouched as he was tutored and conditioned to be something greater for their people and the family’s future.

After all the misfortune and misery of the past, Trystian now forges towards a future he never once imagined as his fate. For the Goddess never truly abandons her children born from the blessed rites of the Calan Mai.

For Trystian Pendragon isn’t just high born, he is Sliocht na Péiste— “born of the dragon”— and his future belongs to the Goddess and to the destiny of the royal Pendragon bloodline. Survive it all, and the Goddess Morrighan just might bless him with a reunified bond he’d once made within the Anáil Dhragain. 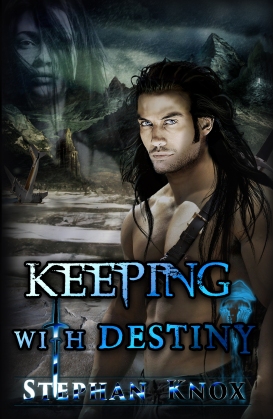 Among the ruins of a world which had long since turned on its axis and over thrown by the Blood Lords, hope for change may seem unreal, but one man is destined to change all that. A man the seers call the Titan. However, in order for him to fulfill his destiny, he will need the gift from a symbiote woman and the journey it will take to convince her to agree will not come easy—
—for either of them.

What does any survivor of a planetary holocaust want— but to keep surviving.

Some one hundred years ago their planet Terra’s surface slipped on its axis while many survived, it is about all they have done. For not long after, the generals of Martial Law, who were meant to protect, instead, declare themselves Lords. Their gains carved out with a trail of blood, generating a fear that plays a price in surviving and over the passages came to be called the Blood Lords. And tyranny got a new meaning. That’s when the Keepers of Destiny came up with a plan—The Symbiotai: an ethereal symbiotic being that is more liquid light than body, brought knowledge and heightened skills to its host to help the survivor colonies to, not just survive, but rebuild.

However, what was meant to be hope was met with fear. For things meant for good, can also be manipulated to become even worse weapons. And it was for this reason, the call for their execution was made.

While the Keepers saw the Symbiote bonds created— the following generations saw to it they were exterminated. Now, only a few remain and Aari may very well be the last Breeder of their kind. So, in order to protect her, They hid her— right under everyone’s noses— within the very military detail designed to hunt her kind down.

A shift in power is coming, so says the prophecies. But it is not Aari who will bring down the Blood Lords. That destiny belongs to one man from the Northern Tribes. A sword wielding warrior the seers call the Titan. But even the Titan will need Aari’s gift, and perhaps something else he wasn’t counting on, in order to succeed.

Stephan Knox [pronounced: stef-fahn kuh-nokz] is a relocated Nova Scotian who now lives in the sunshine state of the US where he spends most of his time writing out on the beach and tending to his accidental vegetable garden. He’s always been known to create vividly wild stores since he was a kid without any desires to publish. Now, after retiring from the concert industry, his longtime affair of writing as a favorite pastime has now become a new profession.

Being a Native American Siksika of mix-blood (mixed culture as well), it was inevitable that everything else in his design would turn out to be a mix-bag of hosh-posh influences thrown into a life time of nerdy-love for the studies into ancient cultures and religions. From his Indian heritage and Mariners family history, to his own self-expressions of gothic punk and natural science, plus a little bit of everything he’s ever explored and sampled, always managing to avoid falling into any form of stereotypical writing definitions, it’s no wonder, when it comes to his writing, he’s a rule breaker. Even when it comes to his two favorite genres: Post-Apocalyptic Dark Fantasy and Historical Fantasy. He writes the stories he’d long since scoured the bookshelves hoping to find that spectacular read— the kind that require a backpack and a cozy pillow to reach the ending.

But in the end, oh the places we will go.